Marlins trade OF Marte to A's and RHP García to Astros 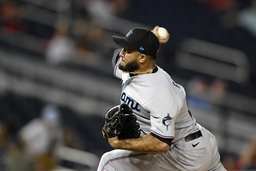 MIAMI (AP) Buried in last place in the NL East, the Miami Marlins made an impact on the AL West race with two trades Wednesday.

The Astros sent outfielder Bryan De La Cruz and right-hander Austin Pruitt to Miami. First-place Houston began the day with a six-game lead over Oakland in the AL West.

Oakland gave up left-hander Jesus Luzardo for Marte. The Marlins will cover nearly all of Marte's remaining contract for 2021, and he can become a free agent after this season.

"We felt like Starling was frankly the best position player that was out there on the market," A's general manager David Forst said before his team's game in San Diego. "We've always said when the team performs and puts itself in a playoff position, it's on us to do whatever we can to try and help them."

For Miami, building for the future was a priority for general manager Kim Ng.

"In terms of next year, there are still moves we'd like to make," she said. "This is not a finished group for next year. These are some of the first steps we've got to take."

Marte, 32, is batting .306 with an .859 OPS and 22 stolen bases in 25 attempts. It's the third time in 18 months that Marte has been traded, and he joins an outfield that also includes Ramon Laureano and Mark Canha.

"Trading a player of Starling's caliber is always difficult, but you have to think of the future of the Marlins," Ng said. "It was difficult on a lot of different fronts but I think we are happy with the return. You can never have enough pitching."

Oakland third baseman Matt Chapman has chatted with Marte on the bases but is eager to see the speedy outfielder in action wearing the green and gold. The defending AL West champion A's have reached the playoffs the past three seasons.

"We're excited to have two great players come to our team and help us with this last push," Chapman said. "The end of the season's always tough. The teams that are in the hunt, everybody's pushing as hard as they can, guys are adding pieces, so it's nice to know that we're getting some help and we've got two really exciting guys coming to our team. We feel good about it."

The Marlins made the deal after they were unable to reach an agreement with Marte on a contract extension.

"New horizons open, and I will continue to give my best wherever I go," Marte tweeted.

Luzardo is 2-4 with a 6.87 ERA in 13 games, including six starts. He was sidelined for four weeks in May after he broke the pinkie on his pitching hand when he thumped a table while playing a video game.

"We've been an organization that's built around pitching," Marlins manager Don Mattingly said before his team's game in Baltimore. "To get a guy like that back at a trade deadline with huge potential is obviously a nice deal for us."

"We really focused in on De La Cruz, We think he's a great add," Ng said. "Pruitt will go right into our bullpen."