Padres-Giants square off for third series this season 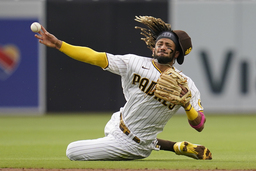 For the third time this season, the San Diego Padres face the leaders of the National League West the next three days in San Francisco.

And for the third time this season, the Padres will be playing the Giants.

But the two events are unrelated. The first two times the Padres played the division leader, that team was the Los Angeles Dodgers. Now the Giants are on top, by a half game over the Padres, as the teams meet for the last time until mid-September when they play 10 times over the final 19 games of the season.

Further, the Giants haven't played the Dodgers yet -- although those California rivals will play seven times before May is over.

The Padres and Giants have split their first six meets. All six of those games were played in San Diego.

Both managers know the other team is real from the results of their first six meetings.

The winning team scored exactly three runs over the first four games before the Padres won 6-2 on May 1 and the Giants won 7-1 the following day. After six games, the Giants have an 18-17 edge in runs.

The series opens Friday night with left-hander Blake Snell (1-0, 3.51 ERA) of the Padres against Giants right-hander Anthony DeSclafani (2-1, 2.00) in a rematch of May 1, which happened to be the most recent outing for both pitchers.

"These teams match up very well," Giants manager Gabe Kapler said in San Diego during the most recent meetings. "The pitching on both sides has made it tough."

Snell picked up his first win of the season that night, holding the Giants to two runs (one earned) on five hits and three walks with six strikeouts in five innings. And DeSclafani suffered his only loss, giving up three runs on three hits and two walks with three strikeouts in six innings.

Both Snell and DeSclafani will be making their third starts of the season against the other team.

Snell has worked five innings in both outings, allowing four runs (three earned) on seven hits and seven walks with 14 strikeouts. He didn't get a decision in the Padres' 3-2, 10-inning loss on April 7. Giants Mauricio Dubon and Darin Ruf have homered off Snell, who has pitched into the sixth in only one of his six starts this season.